Introducing RUN WITH THE ROUSHES

This will be my VERY. LAST. POST. on Keeping Up With Kimberly. I am so excited to announce the launch of my new blog, RUN WITH THE ROUSHES.

I am glad I can finally share this blog with you after working on it behind the scenes since January. I've been debating on whether or not to move to a self-hosted blog for a while and decided that there was no better time than right now.

I have a new post up on Run With The Roushes today explaining why I chose my new blog name and why I felt that now was a good time to update my blog.

All of my posts from Keeping Up With Kimberly were transferred to my new blog so you can still look back and read old posts! Beware – I didn’t go though the older posts and update the formatting so some things might be a little kooky looking. This site will remain live until Google deletes it, so you can also pop back over here to read the archives.

Here is the link to the new blog: www.runwiththeroushes.com.

Feel free to send me feedback through the comments or the contact me page with any suggestions on how to improve your reading experience if you have difficulty navigating the site. As always, thanks for reading :)

Posted by Kimberly at 7:04 AM No comments:


On Saturday, The Professor and I (along with our nearly 6,000 closest friends) ran the Anthem 5K in downtown Louisville. This was my third time running the race and The Professor’s first.

The Anthem 5K is the first leg of the Louisville Triple Crown, a series of three races that lead up to the Kentucky Derby Festival mini marathon and full marathon.

The course is flat and fast. My only complaint is that there were a lot of turns and the roads were still a bit snowy which made the turns difficult. I had to slow down a couple of times to avoid slipping in patches of snow from taking the corners too tight. 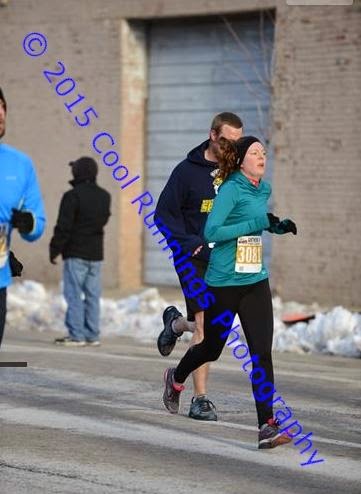 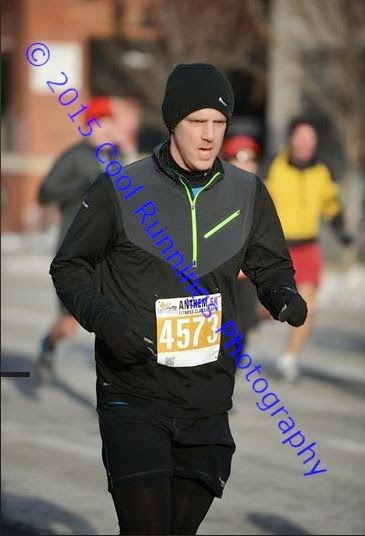 I think these was taken near the the 3 mile marker...I need to get those arms down!!

I was aiming for around an 8:30 pace, but knew I might be quicker than that given my 400 splits during my last speed workout. I started out too fast, but fell into a groove around the half mile marker. I slowed down a bit in the second mile because I was worried I would fall apart in the third mile if I held an 8 minute pace. Looking back, I wished I would have pushed through it. Oh well! I was strong in the third mile and even had a kick at the end. I had my eye on 3 people and I passed them all in the last quarter mile :) Thanks to the guy in black and yellow, my finish photo was not so great...but they never are. Believe it or not, this was the best one of three. Check out that beautiful elbow! 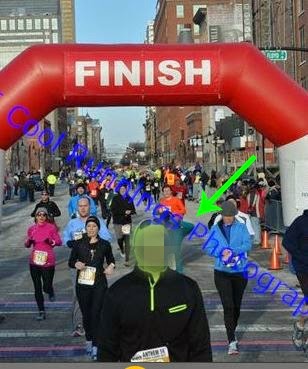 My Garmin clocked the course at 3.17 and my official finish time is 25:07. Here are my official stats: 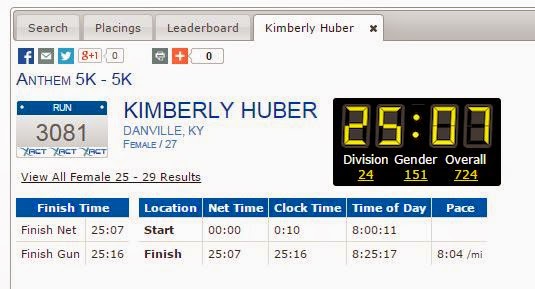 On Saturday night, we went to a Reverse Raffle at my old elementary school where my mom still
teaches, St. Anthony. The Reverse Raffle is a fundraiser held every year for the school and The
Professor and I have attended the last few years and we always have a blast. It is really confusing at first, but once you catch on, the concept is pretty simple. They only sell 200 tickets and each ticket is numbered (1-200). Throughout the night, they draw numbers. When your number is called, you’re out! The goal is to be the last ticket pulled and you are the big money winner :) There are 3 different levels of tickets sold, so there are 600 possible chances and 3 big winners at the end of the night. There are TONS of other smaller prizes given throughout the evening and this year they gave away a total of $6,025 in prize money in addition to a TV and other smaller prizes.

We didn’t win, but my cousin walked away with over $250 in winnings and my other cousin walked away with over $100. No too shabby for the Huber family overall! They also had a silent auction. I bid on a kitchenaid mixer (and lost so please buy me one) and The Professor bid on a canoeing trip (which we also lost). There were tons of other cool baskets that were donated by local businesses and the school. Even though we didn’t win anything, we had a blast hanging out with my cousins and drinking for a good cause :)


So there you have it – two recaps in one post!

What types of fundraisers does your church/school/community host each year?
Did you race last weekend? Where at?

Posted by Kimberly at 7:34 AM No comments: